This is my second week of participating in the Weekly Photo Challenge.  I appreciate this challenge, because it forces me to practice coming out of my comfort zone, although I missed an opportunity… again.  I need more practice.  [chuckle]  I noticed that some people post images they have taken in the past and some post multiple images, so I thought I would post three from the past as well as two done specifically for the challenge.

A couple of years ago, I had the privilege of volunteering at Union Rescue Mission, a homeless shelter on Skid Row in L.A.  While there, a friend showed me around the city, and I found it ironic to find a homeless man sleeping on the sidewalk of Hope Street.

A homeless man sleeping on Hope Street in L.A.

While visiting Las Vegas for a family Thanksgiving, I took photos of some of the street people trying to earn money.  ‘Duby’ seemed to enjoy ‘earning his keep’ by posing for pictures.  Taking photos of street life in Las Vegas is less intimidating to me, because people expect it, and as long as you give any amount of money, they will give permission. It is much different from taking photos of complete strangers in public while trying to respect their privacy, although I have stepped out and asked, and I hope to do more in the future. 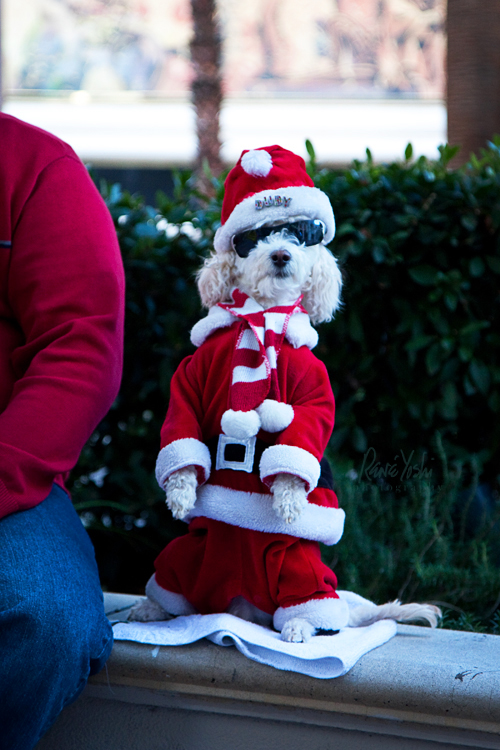 A dog on the Vegas strip dressed in a Santa suit.

I visited Burlington, Vermont this past weekend. It was cool and overcast, so although Burlington’s Church Street hosts some street performers, I missed getting a shot of the only one there that day, but I did get a photo of a colorful cart with lots of fans attached on Main Street, which is just off of Church Street.  I’m not sure if it belonged to a homeless person or some sort of peddler, because he had stepped inside the adjacent establishment.

Church Street in Burlington is open only to pedestrians and is like an outdoor mall. It has some great restaurants and shops, including the Burlington Square Mall, and is within walking distance of Lake Champlain’s waterfront. The atmosphere is very cultural and is a popular place during good weather.